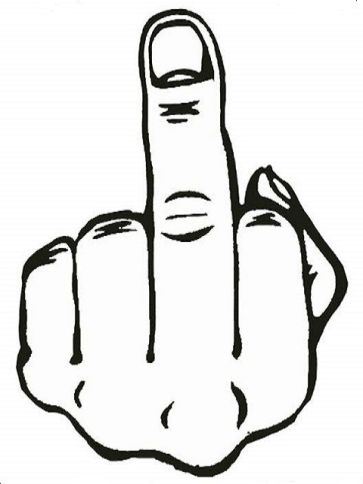 Sometimes, the best way to get over someone bad for you is to simply tell them to fuck off.

Let me set the stage for you.

For those following my Aidon/Danny journey you know I left Australia to come home after Aidon told me he picked Danny. For those new to my blog welcome, and here’s a brief history.

I met a boy from Australia. After many visits to me in LA he made me believe we were in love. Turns out he has a secret side lover (Danny) but he confessed he wanted me. I fly to Australia to seal the deal. He sends me home saying he was wrong and wants Danny. Then he tells me he wants neither of us and that he needs to focus on himself. I, being a dummy, believe him. ONE week passes since I got back from Australia and I’m a sad mess. Well, until now.

I’m super intuitive. Okay, you may be thinking if I’m intuitive why didn’t I see the whole Danny thing coming, but honestly I did. I just ignored it because my stubborn ass will do ANYTHING to make love finally fucking work. Well as I sat, sad on my parents floor, I got a hunch to look at Danny’s instagram. I just knew I would see something, and lo and behold, I did. He posted an instagram story of a bird perched on Aidon’s balcony and I fucking lost it.

I mean, I guess I had no right to be angry, I did decide to walk away. But I walked away thinking I still had a chance. Again, what an idiot I was for still wanting this asshole, but I did. Just because someone turns out to be a dick doesn’t mean the love just goes away.

But I was so upset because just days before, he was telling me he was taking the time to focus on himself and he still didn’t know what he wanted. Now here was Danny, in his apartment, while I sat lonely on the other side of the world. So I did what I should have done a long time ago, I let him fucking have it.

I asked him all my questions, even the painful ones, and watched as he danced around them. I turned the pressure on hotter and then eventually I got my answers. He was picking Danny. Even if I lived there he would have still picked Danny. I had no chance. He then had the AUDACITY to keep telling me that he wanted to be friends and that we are meant to be in each others life and things could possibly not “work” with Danny. FUCK OFF if you think I’m about to be your friend and have you in my life. It’s like he was trying to give me some sense of hope that he could still choose me.

So I told him everything I was holding back. I told him how I thought he was selfish, arrogant, and completely full of shit. I know I should have ended maturely and nicely, but read my old posts leading up to this and you will know that’s what I’ve been doing. It was finally time to let my inner bitch out.

In the end I never found out why he picked Danny over me. But I think it’s because he could control him and I can’t be. I have too much of a mind of my own to be persuaded and manipulated. He may have fooled me for awhile, but he can fuck off if he thinks he can do it again.

So now I’m no longer sad. I’m angry, and anger is a lot more motivational than sadness. I finally feel energized to get up and keep going, and I finally found the strength to block him on all forms of social media. I can’t believe I was about to change my entire life for him. I know love is blind, but did it have to make me fucking dumb too?