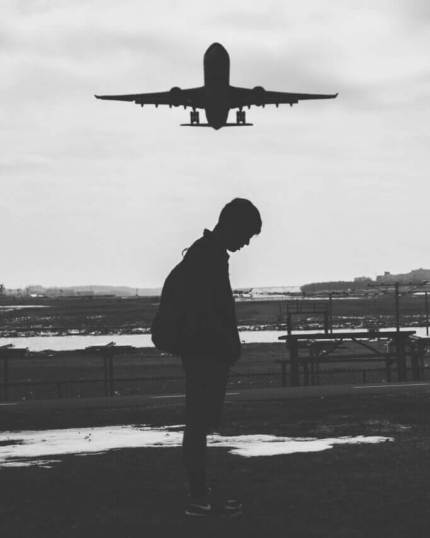 Aidon is handsome, a teacher, blonde, has green eyes, Australian (hot accent), and can be found anywhere around the world on an adventure. And although it sounds like I’m describing someone from a romance novel, Aidon is as real as you and me. I thought we all have that type in our head that we will never truly find, but there he was on my phone screen waiting for me to send that first message on Tinder.

Aidon currently lives in Australia where he works as a part-time traveler and a full-time tutor to a family that has more money than I could ever dream of. Every 3 months Adion travels with them to Beverly Hills for a week to teach the kids. After some casual conversation, I found out he was on his way to LA. This gave me exactly one week to know my dream man.

After arriving in town, he and I exchanged a few texts about our Saturday night plans. I knew I would find him somewhere in West Hollywood, so I wore my sexiest of outfits. A string pink tank top that said “West Coast” with some torn up black skinny jeans. I chugged 4 shots of Vodka before I went out and I was feeling pretty confident. A few bars into the night, I finally stumbled into The Abbey. There, standing across the dance floor, was Aidon drinking a Corona.

He was just as handsome in person and after a brief hello, we found our way to a little corner table. The rest of the night slipped away in our conversation. We spent the night together and I assumed that would have been it for us. One night stands are the norm in LA so my expectations for more were low. Usually, you meet someone interesting and then the next day they’re off with someone else. Most people have the attention span of a goldfish. Everyone wants new, and in gay culture, relationships usually aren’t the trend.

But after that night Aidon and I spent the next few days together with me as a tour guide. I showed him my own personal LA. I took him to MidiCi, my favorite pizza place in the valley. We went climbing at Hollywood Boulders so I could strut my athletic adventure side, and we kissed in between shops at the Grove.

Aidon also served as a guide showing me new things in my own town.

He took me to sweetgreen on 3rd, introducing me to the world of Kale. He helped me discover my new obsession that is Rite Aid birthday cake ice cream. And finally, he treated me to dinner at Cleo in Hollywood because he felt I deserved a “proper” date.

After that first night in West Hollywood, he and I slipped into a rhythm. Every night was spent in his arms and each morning I begrudgingly left them just to return. The hours between day and night became too much of a distance between us. All the while ignoring the fact about the real distance between Los Angeles and Australia.

One night while strolling through Beverly Hills eating ice cream, Aidon opened up about his desires in a relationship.

“I want the type of love where you miss the person the second they leave the room. Where they are your best friend. I see that in my sisters and their husbands.”

Immediately my heart stopped. That was exactly the type of love I’ve dreamed of having but have yet to find.

“That’s exactly how my parents are,” I replied. “They’ve been married for 35 years and my dad will call my mom the second he leaves home.”

After that, we walked in silence. I don’t know what he was thinking, but I knew I wanted more than this week was going to be able to offer us.

The following days flew past, and soon the week ended and It was our last night together. I had to tell him how I felt.

I wanted to be dramatic and say something romantic like, “I love you!” but I knew what we had wasn’t love. It was possibly just the start of it. We didn’t have enough time together to justify me asking him to be mine from halfway across the world. But I was going to miss the good morning kisses, the secret public hand-holding, and most of all, Aidon. I didn’t want to let go because for once I found someone who finally understood my version of love.

“I want you,” were the words that came out of my mouth as we sat kissing in my red Prius. “I don’t know what that means, but I want you.”

He pulled away and looked me in the eyes.

“I want you too. I come back to LA in September.”

“Maybe we are just meant to be a week-long romance?” I asked.

“We are so much more than that.”

And then we let the silence speak for us. Was that a promise of some sort of future? Did he want us as much as I did?

We gave one final kiss goodbye and then he was off, making the distance between us even more of a reality. I didn’t know whether to cry or smile. Aidon just proved to me there is love in LA. Even if only for a week.